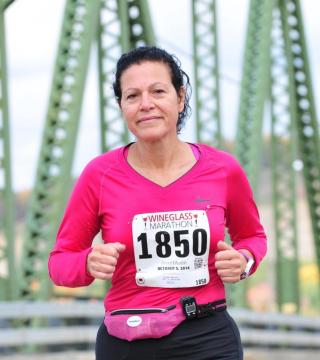 Turning 53 was very important to me, as that is the age my mother was when she died.  I never worried about dying at 53, I was looking forward to celebrating the gift of life that I was privileged to have and I wanted to honor her in some special way.  I know I was gifted with better health and more time in physical form to make a difference in any and every way I found possible.

At 53, I recognized that I had pushed myself in every aspect of my life – through my academic years, being the best mother I could and giving everything I had to my career and the improvement of healthcare in our community.  I had never, however, pushed myself physically.  I was always health/wellness/prevention conscious but I had never thought to push myself to physical limit I thought unattainable.  If anybody had told me I could run a marathon, I would have believed them insane.  I loved the thought of running but never imagined I could become a runner.

My first race in the fall of 2012 was the Breath Deep CNY/Lungevity run – it was not only a fantastic cause (Lung Cancer), it was a smaller 5K race and great experience for a first timer.  I received 2nd place for my age group and that trophy was all I needed to kick start a beautiful running practice.  During that first race, a wonderful gentleman behind me whispered, “Hope you don’t mind me saying – try not to strike so hard and be quieter on your feet if you can.”  It was great run but I had trouble walking a few hours after and was still sore the next day!  As with any new passion, I turned to Google.  A YouTube video about Chi Running popped up in my search.  The interview with Danny Dreyer gave me chills and choked me up a bit and that was it for me – his passion and philosophy of running coupled with the running form not only made perfect sense from a scientific/biomechanics standpoint, the testimonials of what it had done in the life of so many runners was profound.

I signed up for a 4 day course with Danny and fell in love with Chi Running –to such an extent that I became an instructor at the end of 2014.  There was no one in our community to assist and coach me after that class with Danny.  There are only 5 Chi Running/Chi Walking instructors in New York State, in addition to me – four in NYC/Long Island and my friend Mike Meagher in Elmira who traversed the instructor journey at the same time I did. Without Chi Running, I could have never completed my other 5K, 15K, half-marathons and my first marathon in Corning last year (Wineglass).  During the marathon, my 13.1 and 21.5 mile splits were 2:04:23 and 3:32:35, respectively.

When I knew there was no way for me to qualify for Boston (this time!), I slowed down and relaxed to finish in 4:29:17.  What was most remarkable was my recovery – at 55 years old and only running 2 years, I was a bit sore after the race but fine the next day! My family was amazed.  That’s the Chi Running way, I say!

I’m keeping running the Boston Marathon on my bucket list.  To accomplish this goal, I have to run much faster or get older – as the qualifying times become more generous with age.  Truth be told, I’m counting on the latter!

Learning Chi running from Maryann has taught me the proper running form and motion. I now run on average 25-30 miles a week, all with no joint or muscle pain. Running should not be a painful exercise. With Chi running you learn when you are out of form and how to very quickly get back into form, thus minimizing the potential for injury as seen with a improper running form. I highly recommend learning Chi running from Maryann. The classes are fun, informative and your body will thank you later!